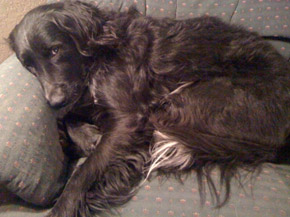 Harry’s people named him Harry before they brought him home from the shelter…before they found out that Harry is some kind of doggy genius.

They brought him home and put him in a crate. He escaped. They got a stronger crate. He escaped. They got a stronger crate and this time checked with the local zoo. The zoo said this was the most inescapable crate they could purchase. Of course, he escaped. But that’s not the best part. The best part is that he didn’t/doesn’t go anywhere. He just gets out of the crate. Then he closes the crate door… from the outside. (Should I add that humans…those with opposable thumbs…have a difficult time opening and closing the latch on this crate?)
Then, after he opens the crate door, walks out of the crate, closes the crate…THEN he stands around until someone notices. Applause, anyone? Could he be more appropriately named?

This dog, Harry…he is VERY smart!!! Take a bow, Harry. You’ve earned it!