She has a difficult time describing how or why she’s able to do what she does, but Adrienne Herman says four-legged creatures speak to her, and she listens, and very often she’s able to help them resolve issues and lead happier lives.

Herman, 67, is a “dog therapist” – a sort of psychologist for the canine set – whose clients also include cats, horses, goats, rabbits, and domestic rats. She describes herself as an intuitive healer and a dog listener. “I can help you understand your dog better,” she declares on her website.

Business in animal-friendly Carmel is good, she says, with enough clients (whose humans pay her $35 per half hour) to keep a shingle hung outside her small, cheery office on the corner of San Carlos Street at Eighth Avenue, where she’s been for five years.

She also makes house calls – lots of them – often preferring to visit troubled animals in their own environments to assess what’s bugging them and consider how they might be helped.

Spoiler alert: Herman’s methods are intuitive – not scientific – based largely on her own self-belief that she’s blessed with an unique ability to communicate with animals, and vice versa. 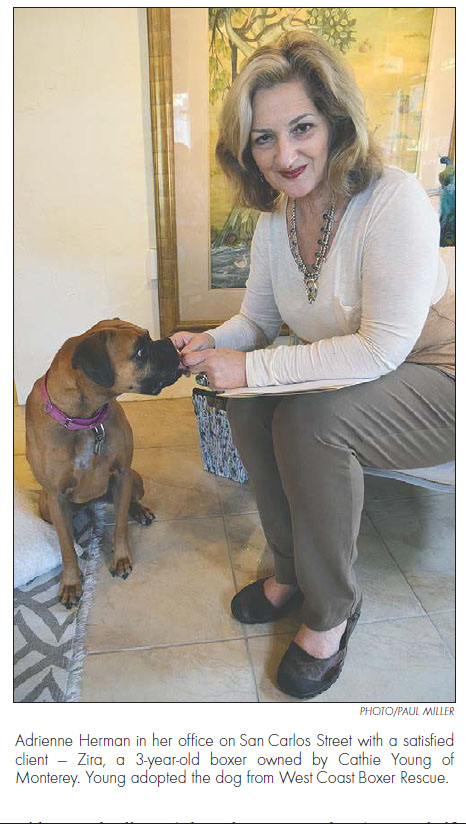 ‘Connecting with the energy’

Although she was classically trained in human psychology – a field in which she earned bachelor’s degree from UCLA and a master’s from CSU Hayward – her own life experiences convinced her that the spiritual world is very real, that all animals (including humans) have “guides,” and that Eastern concepts, such as Ch’i, are to be respected and embraced.

“I do a lot of energy work,” she said. “How do I describe ‘energy work’? It’s somewhat inexplicable, in my case, but some seem to correlate it with Reiki (a form of alternative medicine developed by a Japanese Buddhist).”

The belief that living creatures are surrounded, assisted, and protected in life by “spirit guides” is popular among mediums and psychics and certain spiritualist churches with historic threads in Native American and Eastern religions.

Herman says she communicates regularly with her own guides, as well as those watching over her animal-kingdom clients.

“We are all surrounded by lots of beings who are usually there to help us. Tapping into that on the highest plane possible usually provides us with helpful knowledge, information, answers to questions,” she said.

One dog instantly stopped chewing up the family library when, on Herman’s advice, the owners began reading to him aloud every night. Another began sleeping through the night at long last, after her human began serenading her. A sometimes-berserk horse calmed down after Herman says she discovered a vortex spinning in a nearby field, and instructed the animal’s owner to avoid that route. And multiple pet guardians credit Herman with helping them locate their lost animals by describing the animal’s surroundings, which, Herman says, appeared like a photo or a video in her mind.

Edmund Benech, a Herman client, says his dog, Portia, was suffering from urinary incontinence and was uncomfortable around other animals until he scheduled a session with Herman.

“Portia shared her feelings and needs with Adrienne (and) became more relaxed around people and dogs,” Benech said. “Her incontinence improved significantly. Her strength, stability and walking improved to about 80%. She seems much more content, affectionate, and at peace.”

Another client, Deborah Blankenberg of Lodi, credits Herman with creating a friendship between her two Rhodesian Ridgebacks that didn’t exist before.

“Since working with Adrienne, Pendo and Tamu have learned how to communicate better with each other, and they’ve become best friends,” Blankenberg said. “Even my husband, who was skeptical, credits Adrienne with these big changes. I’ve gained a better understanding of their emotional needs as well.”

Barbara Neil brought her rescue dog, an 8-year-old Cavalier King Charles spaniel named Samantha, to Herman for a diagnosis and treatment of behavioral issues. Herman’s treatments have included herbal supplements such as Saint John’s Wort and Cerato, a homeopathic pain reliever for what she believes are back and joint issues, an herb called Rhodiola Rosea to help relieve stress, and aromatherapy. Neil says she’s seen improvement since treatments began.

Herman has multiple other testimonials on her website, www.ahermandogtherapist.com – endorsements that make her believe she made the right career decision – but says she didn’t start out to become an animal communicator.

“My goal, when I was earning my undergrad and master’s degrees, was to do organizational psychology,” she says. “I wound up working in an acute-care psychiatric hospital as director of intake and community outreach, assessing incoming patients. That was a wonderful job, but it ended when funding for mental health diminished and the hospital closed.”

After relocating from the East Bay to the Monterey Peninsula 17 years ago, Herman spent some time as a special-needs teacher at Congregation Beth Israel on Carmel Valley Road, then spent several years as a caregiver for both her brother and mother.

Her own connection with the spiritual world lay mostly dormant, Herman says, until she was in her 30’s. An epiphany came with the death of her grandmother.

“I’d sit at her bedside and tell her, “It’s OK to die…you’re not going to hurt anymore…everybody you love will be waiting for you…” It was like a mantra, but it wasn’t even a theory of mine. I was just saying things that I thought might comfort her and make her feel less afraid,” she said.

She says she received “a gift” after watching her grandmother draw her final breath.

“Her ethereal body rose up from her body. It was clearly my grandmother, and she was quite beautiful, and she said, “You were right,” referring to all of the things I had been telling her about no more pain, and loved ones waiting,” Herman said. “Very slowly, over the next 20 minutes, that ethereal body dissipated.

“It changed my life,” she said. “I did not hold that belief about the afterlife or the spiritual world before that.”

“That’s a pretty low rate for animal communicators,” she said. “But I don’t want price to be in the way of people bringing their dogs in. It’s the four-leggeds who are asking for the help, and I want their humans to be able to find me and have access to my services so I can give them that help.”

More information about Herman can be found on her website at ahermandogtherapist.com, or by calling her at 831-624-8000.